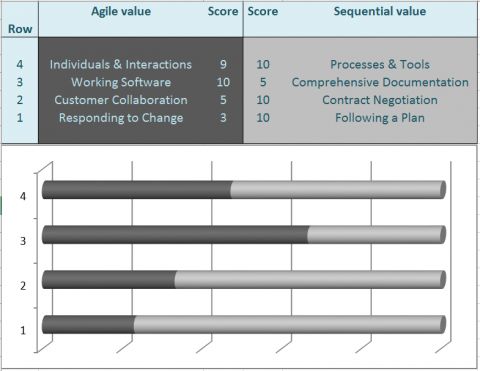 The Agile Manifesto lists four Agile values with contrasting values which typically predominate in organisations following a Sequential development and testing approach (e.g. Waterfall and V-model). A key point made in the manifesto immediately after listing the four left-side agile values with their right-side sequential values is “while there is value in the items on the right, we value the items on the left more”.

All eight values need to have some ‘weight’ in order for organisations to deliver IT systems on time, within budget, and which are fit for purpose.

In terms of these values it does not make sense to claim that an organisation is 100% Agile or 100% Sequential. An organisation is more likely to be transitioning in percentage terms between the 99 shades of grey.

In particular, many organisations are now attempting to adopt agile methods so that they can deliver high quality systems with potentially shippable software increments within a matter of weeks, rather than having to wait for six months to two years for one big-bang release.

When undertaking development and testing improvement initiatives, including conducting TMMi® assessments, it’s important to understand an organisation’s context. For example, the TMMi Reference Model (framework document) provides a list of Sub-practices and example work products for each Specific Practice being assessed, but these are only examples as the appropriate Sub-practices and work products are dependent on organisational context.

An integral part of an organisation’s context is how important all of these values are to the organisation and personnel when IT projects are undertaken. Stakeholders can be asked to score each pair of values at a time from 1-10 rather than express this in percentage terms (e.g. ‘Individuals & Interactions’ contrasted with ‘Processes & Tools’). Each stakeholder scores the higher valued of the pair with a ‘10’ and then gives the contrasting value a relative score from ‘1’ to ‘9’. The results are then aggregated across all stakeholders and a snapshot built of where the organisation is in terms of transitioning from Sequential to Agile values.

The hypothetical example in the diagram may be a large organisation which historically has had a ‘command and control’ management culture in respect to software development and testing, and is new to having empowered cross-functional teams. At this early point in their transition they are starting to implement Scrum as a management framework, but still have separate testing teams undertaking traditional system testing, system integration testing and acceptance testing. For example, user story backlogs may have replaced traditional requirements specifications. Users, developers and testers may be working more closely together in informally reviewing and developing these user stories. The test teams may be moving towards a less heavily scripted approach as part of working alongside the developers and users. Perhaps the biggest challenge could be growing the understanding and trust amongst all stakeholders in respect of being more collaborative and embracing change.

In this particular example the final future ‘shade of grey’ in the organisation’s transition may not be a 10-1 weighting across all four pairs of values, but will be the blend which is most appropriate to its size, sector and business drivers.

He will drive Bloodhound SSC, as he did ThrustSSC which on 16th

It’s better to talk about ‘good practice’ rather than ‘best practice’ as the appropriate software testing approach is so dependent on organisational and project context. When determining an appropriate test approach we need a good understanding

You can't put lipstick on a pig!

Many organisations still believe that software testing is solely concerned with executing code and observing whether tests pass or fail. Running tests against poor quality software is actually a very ineffective and inefficient way of trying to